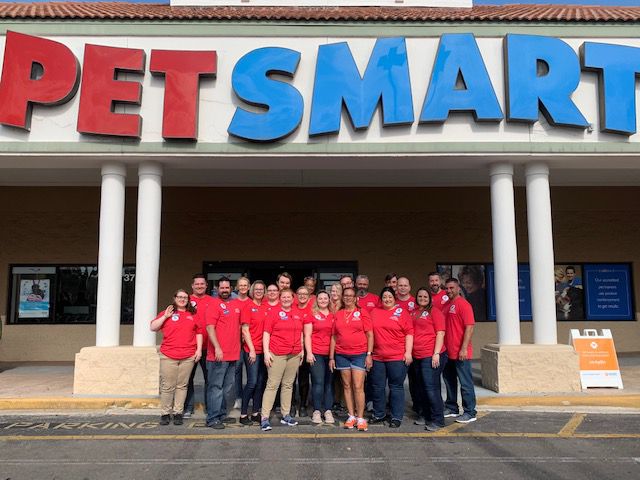 On January 21, PetSmart Store Leader Mark Frantz passed away, but his legacy will live on in the hearts of more than 14,500 pets he helped find forever homes. Since 2014, Frantz’s Gainesville, Florida, store has successfully adopted out more pets through PetSmart Charities’ National Adoption Weekends than any other PetSmart store.

Northern Florida PetSmart stores dedicated February’s National Adoption Weekend to Frantz, a fitting tribute to the man known by friends and strangers alike as “The Adoption Guy.” The celebration included food, special t-shirts and fond memories of the man whose passion for pets made a difference in everyone’s life.

“Mark Frantz was the true definition of a PetSmart guy,” says his assistant store leader Mike Lyons. “Three things outlined his philosophy on pet adoptions: passion, community and fun. Every adoption event was a party with Mark.”

Even when there wasn’t an adoption event, he touched the lives of animals, including a family of ducks attempting to cross the busy highway in front of the store.

“Mark was driving back from lunch,” Lyons recalls. “Concerned for the ducks’ safety, he proceeded to pull his truck across the road and usher the family to safety. A guy who stood 6’4” running alongside a line of ducklings must have been a sight to behold.”

His commitment to adoption was recognized far beyond PetSmart. In 2017, Alachua County, Florida, declared April 11 “Mark Frantz Day” in honor of his contributions. Now, store associates are planning to honor Frantz each year on this date with a special adoption event in his memory.

Mark is survived by his wife of 19 years, Robin, five children and, of course, more than 14,000 pets whose lives were forever touched by “The Adoption Guy.”